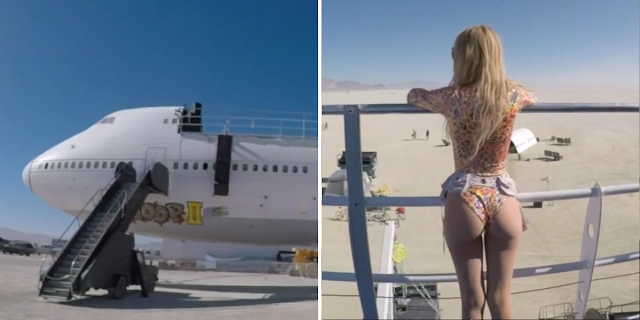 Impressive was the awesome construction of the Mayan Warrior, which participates in the most impressive parties in the vicinity of the event which last until sunrise in the Nevada desert.

Also some ambitious artists managed to turn most of a Boeing 747 into a venue for various events, exhibitions and music parties which they took to the Black Rock Desert to take part in Burning Man. Many congratulations from us for this achievement. You can watch other art cars that took part in Burning Man 2019 in the video below.

Mayan Warrior is the result of a collaborative project that has united artists, craftsmen, photographers, designers, technologists, architects and musicians from Mexico City and Northern California. The project’s original intent was to present to the world the incredible ascent of contemporary Mexican electronic music while paying respect to the deep and ancient sources from which that visual and auditory culture had grown.

Both light and sound are curated by some of the world’s most prominent artists to transport participants to the very origins of the culture – and to a new understanding of contemporary electronic expression.

The Big Imagination project started that way as well — and developed into a gathering that raised and spent barely shy of $1 million to bring a Boeing 747 Jumbo Jet (or rather, 3/4 of one) to Burning Man

They state at their Official site:We are hard at work in the Mojave desert converting a Boeing 747, the world’s most iconic airplane, into a moving art experience for Burning Man 2017. Our plane is a 1985 Varig cargo conversion that once carried passengers in Brazil. Our goal is to transform the plane into a new kind of vehicle inside which dreams, inspired by the same spirit of flight that took the Wright brothers to the skies, can come alive

Once a year, tens of thousands of people gather in Nevada’s Black Rock Desert to create Black Rock City, a temporary metropolis dedicated to community, art, self-expression, and self-reliance. In this crucible of creativity, all are welcome.