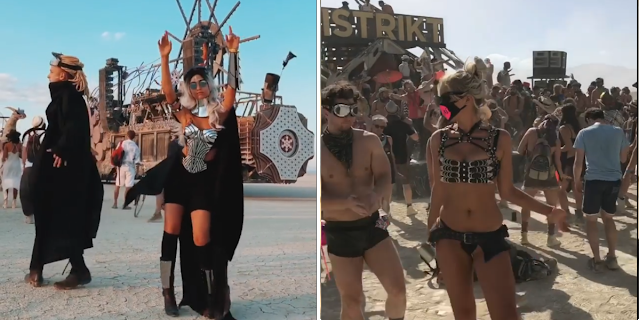 they were uploaded to social media channels from time to time, from the unbelievable world event in the Nevada desert, The Burning Man.

Burning Man is a festival focused on community, art, self-expression, and self-reliance held annually in the western United States. The event derives its name from its culmination: the symbolic burning of a large wooden effigy, referred to as the Man, that occurs on the penultimate night of Burning Man, which is the Saturday evening before Labor Day. The event has been located since 1991 at Black Rock City in northwestern Nevada, a temporary city erected in the Black Rock Desert about 100 miles (160 km) north-northeast of Reno. As outlined by Burning Man co-founder Larry Harvey in 2004, the event is guided by ten principles: radical inclusion, gifting, decommodification, radical self-reliance, radical self-expression, communal effort, civic responsibility, leaving no trace, participation, and immediacy.

According to Burning Man Official site: Once a year, tens of thousands of people gather in Nevada’s Black Rock Desert to create Black Rock City, a temporary metropolis dedicated to community, art, self-expression, and self-reliance. In this crucible of creativity, all are welcome.

Burning Man Project’s mission is to produce the annual event known as Burning Man and to guide, nurture and protect the more permanent community created by its culture. Our intention is to generate society that connects each individual to his or her creative powers, to participation in community, to the larger realm of civic life, and to the even greater world of nature that exists beyond society.

Watch the videos below (swipe).

There is also Midburn Festival, Burning Man’s Israeli cousin and now the second largest regional Burning Man after Africa Burns, is a special 5-day festival held in the Negev. Founded in 2014, the event has attracted a growing family, seeing a record 8,000 people in 2016.

This is not a music festival – there are no official stages – it is more of an art, self expression and community festival where camps host parties – and in the center of the playa are incredible art displays and a huge temple that is burned on the final night.

Watch the video Below:

Below you can also watch a magical flying above Black Rock City, the temporary metropolis of the Burning Man in Nevada.