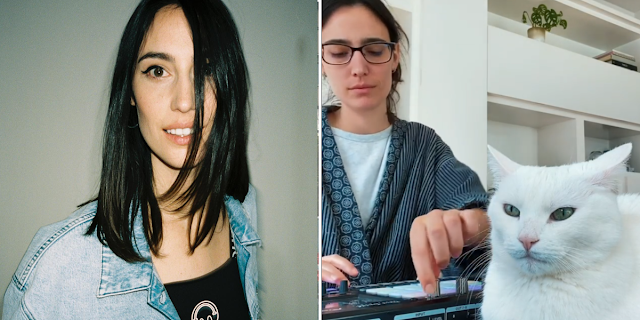 Amelie's cats were present in this live stream and the reactions while Amelie performed, dropping some acid techno tunes were hilarious. You can watch the videos below.

Amelie Lens  is a Belgian electronic music DJ, record producer, and owner of the Lenske record label. Her debut release came on Italian imprint Lyase, and soon after a trio of releases on Pan-Pot’s Second State.

Lens gave up her work in the fashion industry in 2014, and began to DJ under the name Renée, playing mostly bass-heavy minimal techno, earning a residency at the Labyrinth Club in Hasselt, Belgium, where she built enough of a reputation to tour across Europe.More recently her high energy sets are known for their mixture of classic acid and tribal house influences along with more contemporary European techno sounds.

She often plays live using a Pioneer effects box, which she uses "to add layers to the mix. It has a built-in sampler and personalised effects that can entirely reform the track that is playing. Like everything, its use is situational. Sometimes I hardly touch it, but when I play a peak-time set it truly shines. I specifically look for and buy tracks that will work well with the device.