The Californian Comedian Joe Goes interviews people outside Berlin's nightclub, Berghain asking tips how to get in. 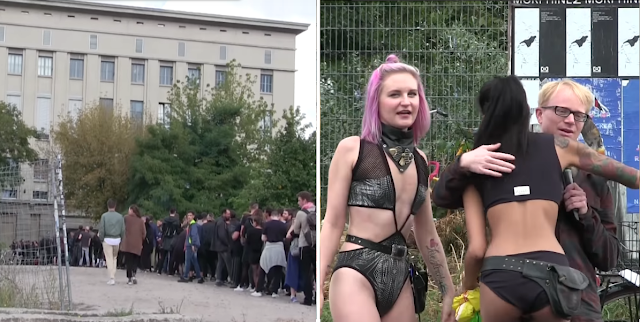 Joe asks the people who are waiting in line outside the famous Berlin club, Berghain  if they managed to get inside. To others, Joe is joking, saying that they will not succeed to enter. Watch the video below.

So asking for advice they explain that in order to get into the club you have to be relevant to the culture of the club, not shake and move while you wait in line and generally look very cool

Two girls who have just left the club explain that you have to support the particular style and clothes that this culture requires you to look relevant and not like a tourist who just wants to enter the club out of curiosity.

They also ask Joe how he has fun in Los Angeles and who his favorite techno DJs are and there he shows that he is irrelevant.

Joe Hanson, better known online as Joe Goes (or BadgeOfShame), is a comedian, actor, interviewer, and YouTube personality from Los Angeles, California. His channel name, Joe Goes, is named after his featured series, which has also been aired on the now shut down TV station Current TV.

Fans of popular YouTube comedian and musician Julian Smith may know Joe the most for his character Randy in Julian's music video for "Eat Randy," where Randy is served as a tasty meal in a fancy restaurant. In Joe's 4th most popular video, he interviews Laina Morris AKA Overly Attached Girlfriend, making her look normal in comparison.

Berghain  is a nightclub in Berlin, Germany. It is named after its location near the border between Kreuzberg and Friedrichshain in Berlin, and is a short walk from Berlin Ostbahnhof main line railway station. Founded in 2004 by friends Norbert Thormann and Michael Teufele, it has since become one of the world's most famous clubs, and is sometimes called the "world capital of Techno

The club is in a former power plant built in 1953 and abandoned in the 1980s. The space was originally rented from the energy company Vattenfall but has been owned outright by the club since 2011. The building is remarkable for its enormous dimensions, with 18-meter ceilings on the main dancefloor. The interior's minimalist design is dominated by steel and concrete. Only half the building is in use.

In 2016, a German court officially designated Berghain a cultural institution, which allows the club to pay a reduced tax rate.