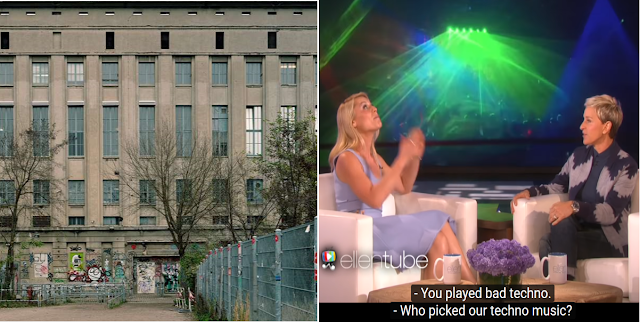 Claire Danes talking about Berghain and Techno music at Ellen's show. Watch the video below and check out some useful info.

Berghain is a nightclub in Berlin, Germany. It is named after its location near the border between Kreuzberg and Friedrichshain in Berlin, and is a short walk from Berlin Ostbahnhof main line railway station.An American journalist described Berghain in 2007 as "quite possibly the current world capital of techno, much as E-Werk or Tresor were in their respective heydays"

Techno is a form of electronic dance music that emerged in Detroit, Michigan, in the United States during the mid-to-late 1980s.The first recorded use of the word techno in reference to a specific genre of music was in 1988.Many styles of techno now exist, but Detroit techno is seen as the foundation upon which a number of sub-genres have been built.


Music journalists and fans of techno are generally selective in their use of the term;
so a clear distinction can be made between sometimes related but often qualitatively different styles,
such as tech house and trance

Germany's engagement with American underground dance music during the 1980s paralleled that in the UK. By 1987 a German party scene based around the Chicago sound was well established. The following year (1988) saw acid house making as significant an impact on popular consciousness in Germany as it had in England.

In 1989 German DJs Westbam and Dr. Motte established the Ufo club, an illegal party venue, and co-founded the Love Parade. After the Berlin Wall fell on 9 November 1989, free underground techno parties mushroomed in East Berlin, and a rave scene comparable to that in the UK was established.
Watch the video below: