You can watch some Amazing scenes from events and after parties in Tulum at Mexico and check out the track names below. 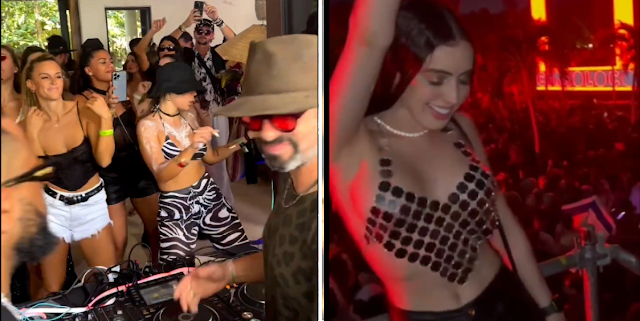 Tulum  is the site of a pre-Columbian Mayan walled city which served as a major port for Coba, in the Mexican state of Quintana Roo. The ruins are situated on 12-meter-tall (39 ft) cliffs along the east coast of the Yucatán Peninsula on the Caribbean Sea. Tulum was one of the last cities built and inhabited by the Maya and achieved its greatest prominence between the 13th and 15th centuries.

Maya continued to occupy Tulum for about 70 years after the Spanish began occupying Mexico, but the city was abandoned by the end of the 16th century. Tulum is one of the best-preserved coastal Maya sites, and today a popular site for tourists.

After party vibes w/ Gordo and Beduin at Tulum. Track: sabb - one of us Dennis Ferrer Remix

Diamanté Anthony Blackmon (born January 3, 1991), better known by his current stage name GORDO (stylized in caps)and prior names Carnage, DJ Carnage and Thirty Rack, is a Guatemalan-American record producer and disc jockey. Blackmon is known for his live performances at major music festivals such as Tomorrowland and Ultra Music Festival and his hit singles "Incredible" with Borgore and "Toca" with Timmy Trumpet and KSHMR.

Bedouin is an American-based music production and DJ partnership consisting of Tamer Malki and Rami Abousabe. Together they share a broad sonic vision that pulls from their diverse influences owing to their Middle Eastern heritage, Western upbringing, and worldly travels.

Live the Zamna Festival experience like never before at the Zamna Tulum Boutique Hotel in a 36 m2 wooden Eco-Cabaña, surrounded by an incredible natural environment in the middle of a Cenote, a few meters from the Stage to enjoy your Favourite artists.

Or in a luxurious apartment in one of the most fashionable areas of Tulum, La Veleta, surrounded by the best restaurants and nightlife options. This package includes transportation to the event. Pool, massages, Mayan experiences, and much more.