We have collected some favorite Scenes with Girls Dancing to Techno and House Music at different events and festival around the world. 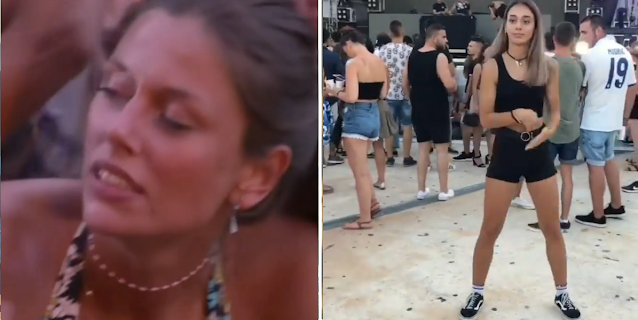 Videos with girls dancing went viral across social media channels. You can watch different outfits and events such as Tomorrowland, a hotel in Mykonos, Burning Man at the desert of Nevada and more. You can watch the videos, check out the track names and read some useful information below.

Tomorrowland is a Belgian electronic dance music festival held in Boom, Flanders, Belgium since 2005.An academic account of the festival and its place in the global culture and business of EDM events was published in 2020.

The 2018 edition of Tomorrowland saw an attendance of 400,000 people for the second year running across the two weekends. The festival took place on 20–22 July and 27–29 July, with tickets for the two weekends selling out in an hour. Mainstage performers included Armin van Buuren, Black Coffee, David Guetta, Dimitri Vegas & Like Mike, Alan Walker and Martin Garrix

For its fifteenth anniversary, Tomorrowland returned to "The Book of Wisdom" as its mainstage theme, previously used in 2012. The festival took place on 19–21 and 26–28 July.

Burning Man is a global ecosystem of artists, makers, and community organizers who co-create art, events, and local initiatives around the world. Most recognizably, tens of thousands of Burners gather annually to build Black Rock City, a participative temporary metropolis in the Nevada desert.

The event has been located since 1991 at Black Rock City in northwestern Nevada, a temporary city erected in the Black Rock Desert about 100 miles (160 km) north-northeast of Reno.

Ultra Music Festival (UMF) is an annual outdoor electronic music festival that takes place during March in Miami, Florida, United States. The festival was founded in 1999 by Russell Faibisch and Alex Omes and is named after the Ultra Music label.

It was first held on Miami Beach, but besides a tenure at Bicentennial Park, and briefly being held at Virginia Key in 2019, it has primarily been held at Bayfront Park in downtown Miami. It was a two-day festival from 1998 to 2006.

After the move to Virginia Key in 2019 , Ultra Music Festival returned to the Bayfront Park location for the 2022 edition on March 25, 26 and 27, 2022. Resistance is Ultra Worldwide's burgeoning house and techno brand.

Also below you can watch this epic moment and reaction of the women when the DJ drops her favorite track. Tracks mixed are: