Solomun and Damian Lazarus played together a few years ago at a unique after party on a boat in the sea around Ibiza. 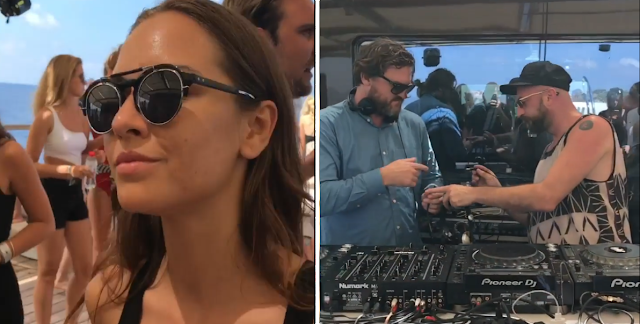 The videos went viral immediately and circulated on the internet. We managed to collect the best moments from this epic party. the videos are from two different parties on different boats. Solomu n, who is also the king of after party, is accustomed to playing for hours after lord event. sometimes in caves, sometimes in villas and ships in Ibiza. You can watch this moments and check out the track names below.

Mladen Solomun  better known under his stage name Solomun, is a Bosnian-German DJ. He is a four-time DJ Awards winner for Best Producer, Best DJ and Best Melodic House DJ.

In 2005, Solomun began producing  Techno, founding the record label Diynamic in late 2005 with his partner Adriano Trolio, who manages the booking for Diynamic.In 2011, Solomun remixed Noir & Haze's "Around. In 2015, he was holding two residencies on Ibiza, at night-clubs Pacha and Destino

In 2018, Solomun played himself as an in-residence DJ for the videogame Grand Theft Auto Online, as part of the After Hours DLC. Additionally, Solomun's music video for "Customer is King"  was made entirely within Grand Theft Auto V's in-game engine as part of a larger collaboration between him and Rockstar Games.

As a DJ, his mastery is unsurpassed. A true storyteller, Damian often holds court at those special times of the day when only his kind of DJ sets are required. Moments that demand a soundtrack that not only fits the mood, but elevates the atmosphere and takes the audi-ence to a whole other level of experience. Besides playing at the world’s best clubbing institutions (resident at DC10 in Ibiza for almost 10 years), Damian also specialises in performing beyond the confines of the walls of a club.

He is an expert in performing his magic in extraordinary outdoor locations; jungles, beaches, the Robot Heart bus in the Nevada desert, Mayan ruins in Mexico and a whole host of other spellbinding sites around the world. Just one look at the superlative Day Zero event will tell you what Damian’s ethos is when it comes to outdoor exploits. Add to that Get Lost and Rebel Rave, two more events that epitomise his approach to hosting alfresco shows.

Watch the videos below. (Swipe left)