Watch scenes from WaFF and Richy Ahmed playing on a private Jet 30,000 Feet high in the sky 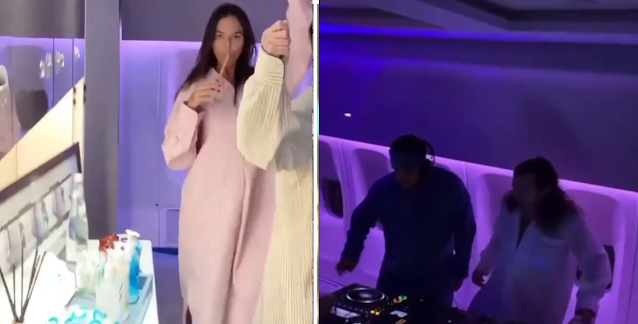 Richy Ahmed & wAFF and people was wearing  pyjamas. The videos immediately went viral on various social media channels. In the first video we see people wearing pajamas while the dj was playing the classic Big Fun - Inner City. You can watch the scenes below.

From his roots in the clubland underground of Leeds and Hull, DJ-producer wAFF has gone on to become globally renowned. He has earnt widespread respect. His schedule is relentless but he doesn’t cut corners. He’s the only British artist who’s recorded for all three European techno hubs, Sven Väth’s Cocoon, Adam Beyer’s Drumcode and Loco Dice’s Desolat.

He approaches music with unstoppable enthusiasm and attention to detail. This summer, for instance, his Ibiza gigs range from his residency at Paradise at DC-10 to Elrow at Amnesia (and the rest of the world!). He’s DJing everywhere, from recent Space in Miami to festival slots at Glastonbury, Hideout, Sziget and, yes, the original Nevada Desert madhouse, Burning Man.

Originating from South Shields in the North East on England, Richy has drawn on his wide experience to build a career with genuine long-term integrity allowing him to inspire and engender the next generation of British house producers and DJs, and in doing so build a long-lasting legacy.

From his breakout release The Drums and A&R’ing for Hot Creations, Richy now has a plethora of releases under his belt on respected labels such as FFRR, Strictly Rhythm, Truesoul, Crosstown Rebels and Play It Say It, and remixed the likes of New Order, Groove Armada and London Grammar to boot.