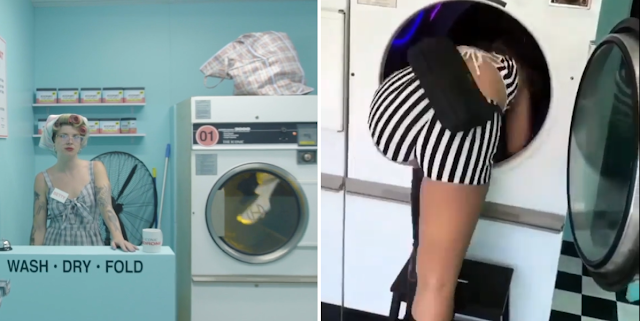 Ιn Australia the The Falls festival in Byron Bay in New South Wales features a rave party hidden behind a washing machine in a laundromat. you can see various party goers who visit it passing through a laundry room end up in the party area and the reactions they have during the process.

At the official channel they state:  Welcome to the magical world of THEICONIClaundromat at Falls Festival Byron Bay. Climb on in and not take it for a spin, but remember everything is not always what it seems...

"Anybody that experiences that machine gets an additional wash, if ya understand what I mean… "The individuals who let interest improve of them crept through the strange third clothes washer, where a world obscure was looking out for the opposite side.

The festival hosts contemporary music performances, dance, comedy, theatre, circus, cabaret, and other art forms. Camping is available and all locations have nearby beaches which are either walking distance or a short bus ride away. Artists playing at the festival include rock, hip hop, indie music, electronic music, blues and roots.

Also below you can watch a secret rave in Berlin named 1A Laminat. One strange thing about this event is that when you try enter to their website, a password is needed.

Track: you are toxic-Deborah De luca

Also here is another place with the same concept  in Paris. Lavomatic hides a cocktail bar within a Paris laundromat.