The Italian techno artist grew up in the suburb, where the critically acclaimed Mafia crime drama Gomorrah is set, and this will be her first time playing there. 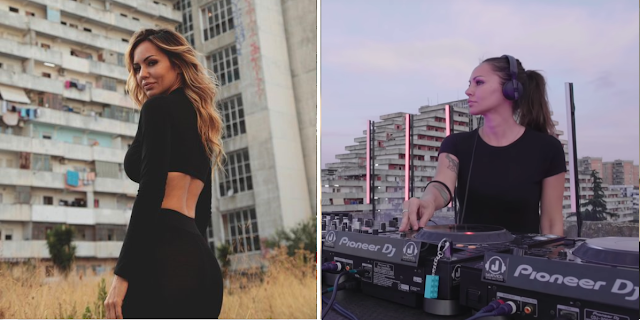 The opening track of the set named Dori Me which is Deborah De Luca's creation was one of the highlights. the Italian techno artist also played her edit Daft Punk's Technologic in  1:06:30 minute.

The closing tune was a compination of melodies and techno vibes named Gianluca Brugnano - Love Theme (Deborah De Luca Remix). In 37:00 minute Debora played another techno banger named MOTVS - Fracture.The dj set starts at dusk and during the night it lights upand the lights go on eagerly in combination with the strange buildings creating an atmospheric techno music environment

Expect powerful sounds against a striking backdrop. Deborah De Luca is also set to release her second album ‘She Sleeps’ via Sola_mente Records on August 18 this year.

The Vele di Scampia is a large urban housing project built between 1962 and 1975 in the Scampia neighbourhood. It was named for the triangular shaped buildings, reminiscent of a sail, as they are wide at the base and narrowing as they rise. They are similar to Marina Baie des Anges in Villeneuve-Loubet, France.

Deborah De Luca was Born under the shade of the sails of Scampia, difficult neighborhood at the periphery of Naples. Born in 1980, she embarked on a career in the music world working very hard  , starting as a waitress in many clubs and then as a dancer for several years.