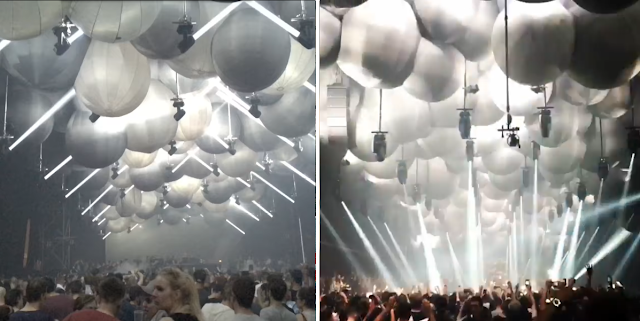 Τhe first scene is from the master Adam Beyer's DJ SET who plays the classical techno music track Adam Beyer & Bart Skils - Your Mind which was viral on all relevant social media channels. Moreover in the 3 video plays another massive tune Symbiosis from Enrico Sangiuliano. In the sixth video the Pan Pots play the Fisto - T78. The second scene is from the performance of Ben Klock. You can watch them below.

Time Warp established itself in 1994 as one of the biggest techno spectacles in the world. The German edition of the festival is a hot-spot for thousands of party people every year. Since 2000, Mannheim has been the festival's home base.

For over two decades, Time Warp stands out globally because of its uncompromised production levels. But Mannheim is not only the ideal location for unique floor designs. The roster of techno artists also captures the underground spirit of the event. Titans of the genre return on a regular basis alongside up-and-coming artists.

Time Warp has since grown from a local highlight to an international behemoth. Global editions are held in cities like New York, Amsterdam, Sao Paulo and Milan.

Every year over 40 DJs and live acts gather in Mannheim to deliver 19 hours of party pleasures. Time Warp bands together a crew of the electronic elite. For fans, it's a chance to see the creme of the electronic crop in one place, making it an essential date in the calendar. Guests embark on a techno adventure between the different arenas on six floors. Visuals, lighting shows and heavy production heighten the senses for an immersive experience.