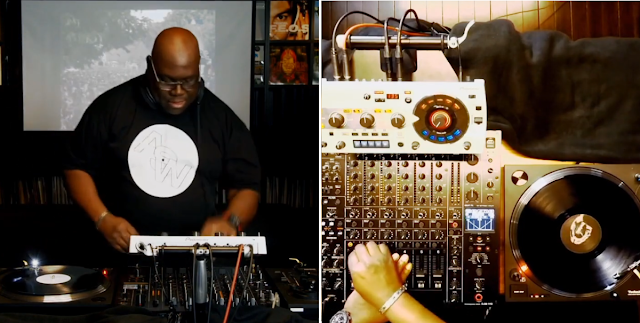 King Carl Cox delivered another set playing Techno music 2000 classics using three vinyl decks.You can check out the track list, read some useful information about his Legendary career and watch the set below.

It was at the age of 15 that Carl bought a set of turntables and began working as a mobile DJ. Disco was the first music that captivated him but by the early 80s Cox had moved on to playing the same music as other young London DJs – rare groove, New York hip-hop and electro.

He was perfectly placed to hear Chicago house music in its earliest forms, and when the epic 'Acid Trax' by Phuture (a.k.a. DJ Pierre) came out in early '87.

“It was then that I thought, 'This is it,’ says Carl. “I would do my parties, and I'd play old rare groove and hip hop and soul and I would say 'Right you've got to hear this Phuture track’ and people would just stop and listen.”

Carl formed his own label, Intec Records, in 1999, scoring a series of underground hits and enjoying eight years at the forefront of electronic music

Carl’s legendary Ibiza residency also continues to break boundaries. Celebrating an astounding 14 consecutive years at Space in 2015, Carl and Safehouse Management have built their weekly residency into one of the Island’s most popular nights, acclaimed for its adventurous and forward-thinking line-ups, musical direction and state of the art production.

Summer 2014 was also a record season for Carl in Ibiza – on top of his residency, he also played the Space closing Fiesta, along with dates at Amnesia, Sands and DC10.