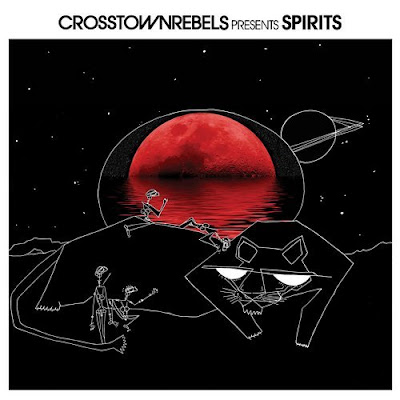 lnk.to/CRMCD035
Let​ ​your​ ​mind​ ​wander​ ​free​ ​with​ ​the​ ​first​ ​in​ ​a​ ​new​ ​annual​ ​compilation​ ​series​ ​from​ ​Crosstown​ ​Rebels, allow​ ​us​ ​to​ ​introduce​ ​Spirits.​ ​Label​ ​founder​ ​Damian​ ​Lazarus​ ​has​ ​compiled​ what​ ​he​ ​describes​ ​as​ ​“a​ fresh​ ​psychedelic​ ​journey​ ​into​ ​the​ ​mind”,​ ​aiming​ ​to​ ​bring​ ​together​ ​a​ ​collection​ ​of​ ​new​ ​artists​ ​from​ ​both his​ ​imprints.
dubspeeka​’s Lyssa opens the album with a sturdy bassline, eerie synths and a haunting melody reminiscent of yesteryear. Followed shortly by Audiojack​’s Reverie; a heavy kick from the start is succeeded by spoken word on the subject of meditation. Rowee and Know Kontrol ​incorporate poignant wooden percussion in the intro to Amarantro, the song features absorbing lyrics and a delightfully oblique melody. Be Mine by Siopis featuring Ellbee Bad gets straight into the action with hard-hitting reverberated low notes, steadily building up through sentimental vocals and enticing synthesis. A minimalistic xylophone and drawn out synths form the intro of Magit Cacoon​’s Nonsense. Jonthan Kaspar​’s Zarun is a sensory delight, littered with unique percussion, a muted kick and siren-like midi sounds.

Alice Rose seduces in Another Way produced by Raw District​. Her voice, similar to that of Bjork, perfectly encompasses the heavy bassline and hard-hitting percussion. Robbie Akbal has an ear for a great intro, mysterious sound effects and gradually building drum sounds form the basis for Tavarua. Nico Stojan & David Mayar have gone balearic with Killing Your Lover, featuring vocals from the incredible Jan Blomqvist​. Dance Spirit featuring Fab Morvan are up next with Voices, a journey through spiritual vocals and bassy reverb to a rolling kick and percussion-heavy ending. Finally, Pale Blue finishes the album on a high with Journey Into Light, a gradual intro leads the way for an exquisite, yet minimalistic melody and enchanting female vocals.
Skeleton label owner Dubspeeka has seen huge success since the release of his debut album Population 50201, just over a year ago. Leeds based Audiojack are rapidly rising on the house and techno scene, the duo recently enjoyed musical outputs on Sasha’s Last Night On Earth, as well as the revered Mobilee. Receiving a nomination for Best Track at the Vicious Music Awards not long back, Leonardo Gonnelli has been rapidly building momentum in the scene producing and performing under his new alias Rowee. Siopis, or you might know him as Silversurfer, returns to Crosstown Rebels once more after co-producing the label’s very first release back in 2003. Juggling his time, the Berlin-based producer also runs his own imprint MANGALI.

Quickly becoming one of the most admired female artists on the techno scene, Magit Cacoon has recently remixed the likes of Steven Wilson and Dast. Cologne based producer Jonathan Kaspar has wowed audiences with his groovy sets worldwide and most recently remixed David Mayer on Objektivity. Formerly Vernon&DeCosta, since 2013, Vernon Bara Massimo DaCosta have been producing deeper, darker house music under the alias Raw District. Alongside releases on established labels such as Souvenir Music and Defected, the duo have played renowned Belgian festivals such as Extrema Outdoor and Wecandance.
Long time friend of Lazarus, Robbie Akbal has had the privilege of living through various generations of house music. On the scene since 1993, his productions have evolved over time and the quality kept him at the top of his game. House music forerunners Nico Stojan and David Mayer have been causing a stir on dancefloors worldwide this year. LA duo Dance Spirit have appeared at several Get Lost events and previously released on sister label Rebellion. Set to release further music on Crosstown Rebels, Pale Blue have risen to the top since the launch their debut album The Past We Leave Behind, most recently they have released on Man Power’s label Me Me Me.