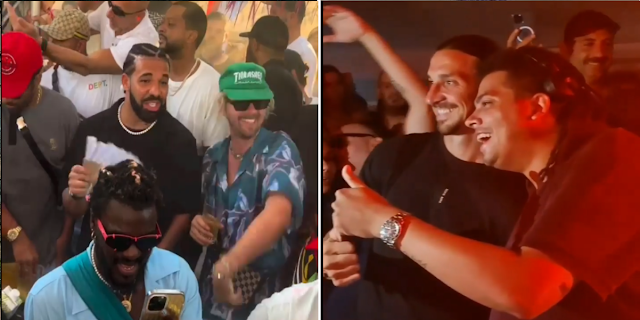 Below you can watch Drake having some fun with the Legend Black Coffee at Ibiza's super club Hi Ibiza and with Keinemusik Crew at Shellona in St. Tropez. Meawhile a video emerged at social media with Zlatan Ibrahimović having good time with Seth Troxler. You can also check out some info and the track names below.

Drake gave fans at the new Black Coffee show on July sixteenth at Hï Ibiza a genuine delight when he appeared for an unexpected appearance during the DJ's week after week home at the club.

While turning the tune, Massive, from Drake's most up to date collection, Honestly, Nevermind, the Canadian rapper left, gave Black Coffee an embrace and started moving in the corner. Black Coffee Hï Ibiza residency began in May and will extend until October 1st.

Drake visited these place at St.Tropez pell-mell, Bagatelle, Shellona, ​​Gigi and of course Club 55 where the rapper landed from the juggernaut of the seas on which he had previously stopped in Ibiza.

The Chuck Norris image of the soccer world is presently holiday, staying in shape during the day and demonstrating in a couple of shots that he actually has some strength for dance moves in the club at night. US DJ and producer Seth Troxler was all the more joyful.

During his set, he made a move to take a selfie with "Ibra" and distributed it on Instagram somewhat later. Obviously, the customary "Zlatan" sayings in the remarks were not long in coming. One of these: Zlatan is not Dancing, Dancing is Zlatan