Watch Peggy Gou performing inside a train in South Korea

Peggy Gou performed at DJ set inside a train in Wolmi at South Korea. 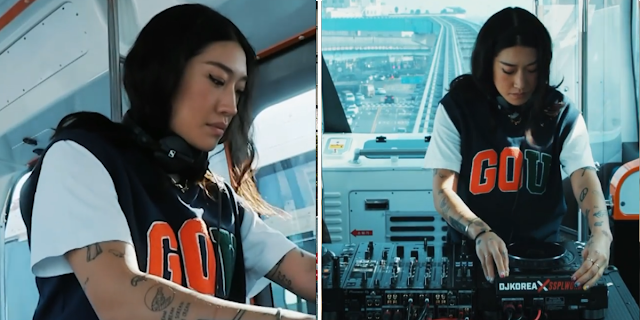 Korean Superstar wrote at her social media channels: "Last time I played iconic Namsan Tower in Seoul. This time, streaming from Wolmi Sea train to show you Incheon (city I was born)". You can watch the best moments below.

Peggy Gou is a Berlin-based South Korean DJ. She has released seven EPs on record labels including Ninja Tune and Phonica. In 2019, she launched her own independent record label, Gudu Records, and released a DJ-Kicks compilation, DJ-Kicks: Peggy Gou, on !k7 Records.

In 2019, Forbes named Gou as one of the Asian leaders, pioneers and entrepreneurs under age 30. In February 2019, Gou launched her own fashion label KIRIN (“giraffe” in Korean), supported by Virgil Abloh, under the New Guards Group. The following month, she announced the launch of her own independent record label, Gudu Records (gudu means "shoes" in Korean).

In June 2019, Gou released DJ-Kicks: Peggy Gou, the 69th installment of !K7's DJ-Kicks mix compilation. The album became her first Billboard chart appearance, reaching 9th in Dance/Electronic Album Sales, and the second compilation that ever got into the top 10 after Moodymann's.

The Wolmi Sea Train (월미바다열차), formerly known as Wolmi Galaxy Rail, is a monorail on the island of Wolmido in Incheon, South Korea. The monorail line has 4 stations and covers 6.1 km connecting Wolmido Island to Incheon Station, the west terminus of Seoul Subway Line 1 and the Suin Line. 1.15 km is double-tracked, but the loop around Wolmido (3.94 km) is single-track. Phase 2, if built, would have added 2 km single track connecting to Dong-Incheon station, also on Metro Line 1, with a potential Phase 3 looping back to Incheon station.

The system is the first in the world to use Urbanaut technology, whose selling point is an inverse T-shaped track: large wheels run on the horizontal part of the track, while small wheels press against the rail and keep it in place.

Watch the scenes below.