Shawn Wasabi shows us how to watch your hands properly. 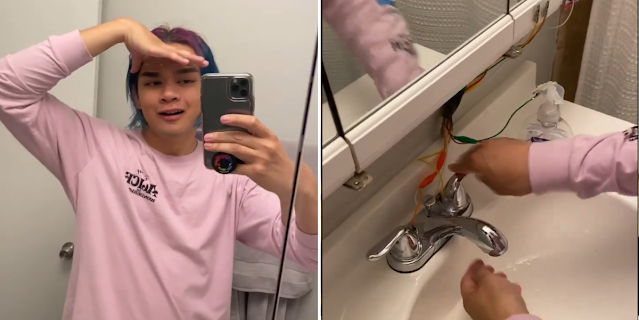 He creates music in a genius way using cables connected to a laptop while he washes his hands. Various sounds and music are heard when he opens the tap and presses the antiseptic container.

Shawn Serrano (born May 26, 1994), professionally known as Shawn Wasabi, is an American record producer from Salinas, California. He is credited as a co-inventor of the Midi Fighter 64. He resides in Los Angeles.

In 2013, Shawn Wasabi started producing music after his friend left the Midi Fighter 3D at his house. Since then, he has uploaded his live mashups, which have all garnered millions of views on YouTube.

In 2015, he released "Marble Soda", using a Midi Fighter 64.It contains samples from 153 different tracks and sounds.The video for the song reached 1 million views on YouTube within 48 hours of being uploaded.

In 2016, he was nominated for the Breakthrough Artist award at the 6th Streamy Awards.

In 2018, he released "Squeez", which featured guest vocalist Raychel Jay. The song was included on Paper's "10 Songs You Need to Start Your Weekend Right" list, as well as The Fader's "20 Best New Pop Songs Right Now" list.

His debut studio album, Mangotale, was released in 2020.