Paris Hilton, Riley Red and Diplo in strange moments of fun at the Burning Man 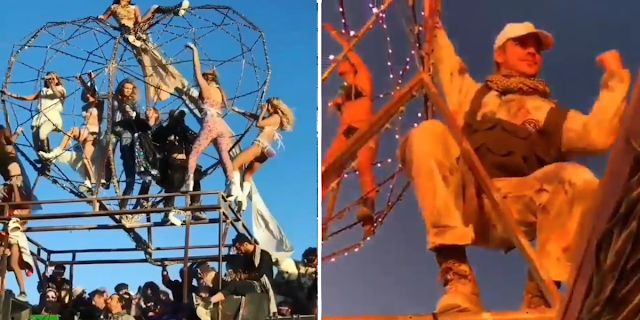 which takes place in the Nevada desert in late August each year.As you can see below Paris Hilton has climbed into the heart of Robot Heart art Car during the DJ set of Luciano. Diplo has done the same, but we do not know who was there that day. The videos are from different dates. Riley Red, on the other hand, is in the desert in a short sexy video. We have also found the songs that are played during the videos

Burning Man is a festival focused on community, art, self-expression, and self-reliance held annually in the western United States. The event derives its name from its culmination: the symbolic burning of a large wooden effigy, referred to as the Man, that occurs on the penultimate night of Burning Man, which is the Saturday evening before Labor Day. The event has been located since 1991 at Black Rock City in northwestern Nevada, a temporary city erected in the Black Rock Desert about 100 miles (160 km) north-northeast of Reno.