Α couple of years ago an epic after party took place at a villa in Sao Paulo, Brazil. 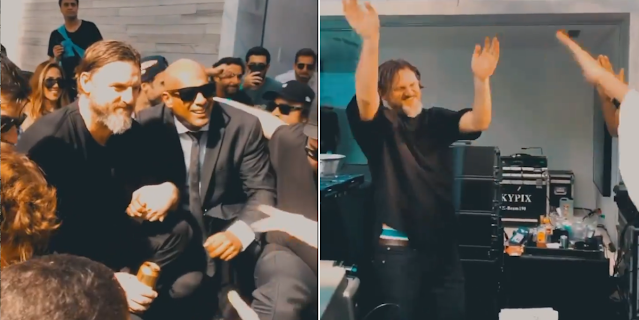 There, the usual suspect, the king of after parties according to many fans, Solomun, dropped in the mornings some awesome house and techno music tracks.

The videos immediately went viral on social media. The combination of music with the awesome positive energy of conductor Solomun,who did not fail to do his classic dance moves and to mingle with the lucky few who managed to be at this party make these moments unique.

Of course, the most critical moment that caused panic among the fans of the German maestro on social media was when Solomun left the decks and went down with the people. As an amazing song was playing that was unreleased at that time and one of Solomun's favorites now known as Angelov - Retrida,

then everyone sat down with beers and drinks, waiting for the song to evolve and as soon as the enchanting sound with the bass erupted, everyone got up and danced, embracing Solomun.
It is characteristic that a gentleman in a suit, possibly a security guard, also took part in this scene and enjoyed it with his soul.

Angelov - Retrida was released a little later on Solomun's label DIYNAMIC and you can listen to it below.

In the next scene, just as epic as the first, Solomun this time is on the DJ decks and plays another favorite song that most fans were looking for. This according to the fans called, Cassius - The Sound Of Violence (Antony Toga Background DiscoVox Version). So then Solomun dropped his characteristic dance moves once again.

Αgain shuffled with those in attendance,The Big man, let everyone dance together and have
fun while listening to the amazing Ryan Murgatroyd - Wicked Eyes (Ryan Murgatroyd & Kostakis Remix) through the speakers. You can see the whole list of songs and the unique moments below.