David Guetta introduced another outstanding audio visual show of his streaming series United at Home, this time on the top of perhaps the most amazing buildings στο Dubai Burj Al Arab. 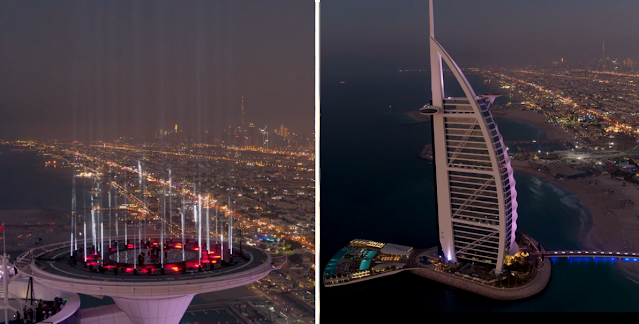 The French legend, due to tracks like "Titanium" and "How Soon Is Now", has established himself as one of the true geniuses of EDM at the end of the last decade has recently adapted its sound, and is currently a pioneer in developing and creating the sounds of a future rave, which includes more obscuretechno and tech-house seasoned sounds through his Jack Back, nick name.

Guetta has also fascinated isolated ravers in pandemic with the live stream of "Joined At Home". Helping raise money for the World Health Organization (WHO) with its first exhibition in Miami last spring,with fans and celebrities from all over the world coming in to watch this amazing audiovisual show

The next show was on Τop Οf the Rock in New York last summer, On New Year's Eve, Monsieur Guetta presented an epic show outside the Louver, in the city of Paris.

Over the weekend, the Guetta team changed the luxury inn helipad into an epic stage for its show. Accepting the vast city scape at sunset, the DJ scene lit up the night sky, highlighting the excellence and construction of Dubai.

Playing for just over an hour, the No. 1 DJ kicked off his set with a remix of the "Titanium" Future Rave remix. He also presented his first techno and house music creations by Jack Back,
such as Jack Back - Amsterdam and Jack Back - Permanence. It is characteristic that he chose the techno music classic track, Domino from Oxia.

The stunning audio visual show closed with lots of fireworks and drones traveling through them while listening to Energy 52's classic trance anthem Cafe Del Mar remixed by Tale Of Us and reworked by David Guetta .

In these troublesome occasions, we desire to bring solace, happiness, and backing through the force of music and feelings. We have upheld many charities and aided have a genuine effect in individuals' lives during the pandemic.

You can support UNICEF and Dubai Cares causes here.