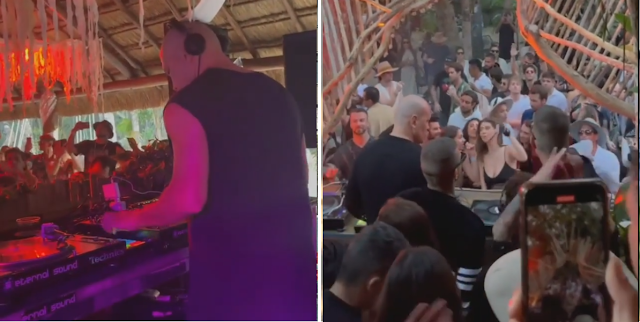 The capacity of the venue was limited, some lucky party goers attended the event and uploaded some wicked moments. One of the was when maestro Marco played &me's magical remix of  Guy Gerber - What to do. You can watch the videos and check out the track names below.

Marco Carola (born 7 February 1975, Naples, Italy) is an Italian electronic musician and DJ. As a producer and label head, Carola has created labels like Design, Zenit, Question, One Thousands, Do.Mi.No. and Music On. Carola has been releasing music on a selection of labels such as Minus, Plus 8 2M and Primate Recordings.

In addition to five albums, including his latest ‘Play It Loud’ in 2011, Carola has also been responsible for a clutch of seminal mix compilations. In 2006, his mix Fabric 31. for the London club Fabric’s series was a lesson in sleek, future-facing minimalism. That was followed up by compilations for Time Warp in 2009.

Carola has also held very successful residencies at Amnesia Ibiza, with Cocoon, for two years, and with his own Music On project from 2012 until 2018. Music On was launched in 2011 at the Shelbourne Hotel in Miami, as the way for Carola to implement his vision of clubbing and music development and to share his wealth of experience and knowledge. Luca Piccolo was also established as Carola's manager and international booker the same year.