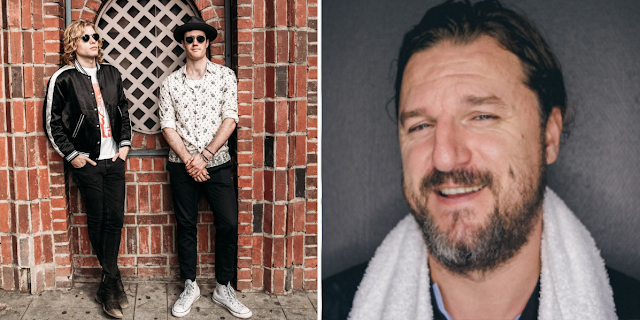 Solomun is remixing Bob Moses and ZHU Desire. You can watch the video clips and read usefull information about the artists below.

In 2005, Solomun began producing music, founding the record label Diynamic in late 2005 with his partner Adriano Trolio, who manages the booking for Diynamic The motto for Diynamic is "Do It Yourself"."

Eventually, Solomun met H.O.S.H. in 2006 over techno tapaa and that is when Diynamic kicked into full force. Solomun's first EP on Diynamic, Solomun EP, came out in 2006. Since then, he has released many other EPs and compilations, as well as the 2009 album Dance Baby.In December 2010 he launched a second label, the more experimental 2DIY4.

In 2015, he was holding two residencies on Ibiza, at night-clubs Pacha and Destino.

Solomun kicked off 2016 with two events at The BPM Festival including Diynamic in the Jungle and Solomun +1 with Mano Le Tough. Following that, the Bosnian artist continued touring across North America. The Diynamic family then celebrated ten years at Watergate in Berlin on April 9, 2016, which they followed with a ten-year celebration at DC-10 in Ibiza on August 19, 2016.

Solomun also hosted two residencies in Ibiza, Spain, in 2016—Solomun +1 at Pacha and Solomun +1 live at Ushuaia and Destino. He has played at events like Ultra Europe ,Exit Festival, Melt! Festival, Tomorrowland, and Movement Croatia in 2016 and 2017, also in Hungexpo in 2018.

In 2018, Solomun played himself as an in-residence DJ for the videogame Grand Theft Auto Online, as part of the After Hours DLC. Additionally, Solomun's music video for "Customer is King"  was made entirely within Grand Theft Auto V's in-game engine as part of a larger collaboration between him and Rockstar Games.

Bob Moses is a Canadian electronic duo based in Vancouver, British Columbia. Formed in New York City, the band consists of Tom Howie and Jimmy Vallance. A remix of their song "Tearing Me Up" by RAC won a Grammy Award for best remixed recording, non-classical.

Bob Moses' debut album, Days Gone By, was released on September 18, 2015. "Tearing Me Up" became the most prominent song on the album, earning Grammy Award nominations for best dance recording and best remixed recording, non-classical.

It went on to win the latter award for remixer RAC. Vallance said the concept for the song was imagined while both of them were "going through something very similar" in their romantic lives.Howie has pointed out that part of the song's inspiration came from the beat of Gary Glitter's "Rock and Roll Part 2". The song received considerable radio airplay in the United States, having peaked at No. 16 on Billboard's Alternative Songs chart.

In January 2016, Bob Moses performed on The Ellen DeGeneres Show, after being personally picked by Ellen DeGeneres to appear on the show. They performed "Tearing Me Up".Tracks from Days Gone By have also been played on ABC's TV show, The Catch.

On August 19, 2016, Bob Moses released a special Never Enough edition of their album Days Gone By. The album featured remixes of "Like It or Not" and "Tearing Me Up" from artists like A-Trak, RAC, Joris Voorn, and Tale of Us. The album also featured two new bonus tracks, "She Don't Mind" and "Here We Are", along with live versions of "Tearing Me Up", "Before I Fall", and "Nothing At All."

In 2017, Bob Moses was nominated for Live Act of the Year at the Electronic Music Awards.

On May 30, 2018, Bob Moses announced a new tour in North America, along with a new single titled "Heaven Only Knows".

On July 26, 2018, Domino announced that Battle Lines would be released on September 14, 2018 and released the first single from it, "Back Down."

On September 14, 2018, Bob Moses released their second album, Battle Lines, on multiple streaming and music services as well as on CD/LP via their label Domino.

On December 12, 2019, the duo released the Unplugged EP, featuring acoustic versions of three songs from the Battle Lines album, plus a cover of the song "Save a Prayer" by Duran Duran (from the album Rio, 1982).

Steven Zhu, known mononymously as ZHU,  (born April 28, 1989) is an American musician and singer who has been active since the beginning of 2014, signed to Mind of a Genius Records. Until mid-2014, Zhu remained anonymous, asking to be judged by his music alone. His debut album, Generationwhy, was released on July 29, 2016.

Zhu's first track, "Moves Like Ms Jackson", a mashup of several songs by Outkast, was released anonymously in February 2014 and was positively received by blogs and reviewers covering electronic music.Other tracks appeared on the music streaming site SoundCloud throughout February and March, followed by an EP titled The Nightday in April 2014, which earned a number 1 play of the week on Triple J.

The first single from The Nightday, titled "Faded", drew support from Pete Tong, who named it an "Essential New Tune" on his radio show on BBC Radio 1. "Faded" was released in March 2014, and quickly climbed the global charts, peaking at number 3 in Australia and the UK, and number 12 on the US Dance/Electronic chart. "Faded" was certified platinum in Australia in 2014 and was nominated for the Grammy Award for Best Dance Recording at the 57th Annual Grammy Awards.

On May 15, 2015, Zhu appeared on Pete Tong's "After Hours" show and performed a 40-minute DJ mix, mostly consisting of unreleased remixes, and also announced the Nightday Collection clothing line

Zhu's success carried over into 2017, where he was a featured performer in Ultra Music Festival 2017 in Miami on the live stage on March 24, 2017. His performance was positively received