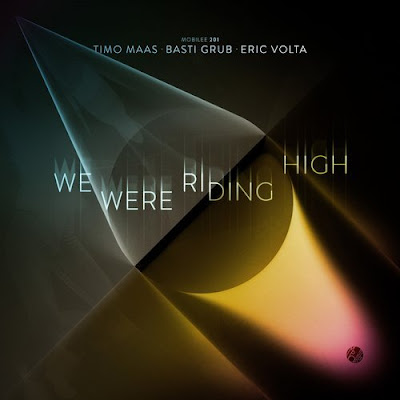 Get it on Beatport: bit.ly/2wxW3w0
mobilee201 - Timo Maas, Basti Grub, Eric Volta - We Were Riding High


The masterful trio of Timo Mass, Basti Grub and Eric Volta showcase their combined musical muscle on the latest release forthcoming on supreme Berlin imprint, Mobilee. With an impressive remix package featuring Rodriguez Jr. and Martin Buttrich to drop in the Summer.
The initial release in May delivers two variations of the title track. Opening with the original mixdown, We Were Riding High is a sublime summer anthem. Over two years in the making, it’s a lucid after-hours track with an uplifting and catchy vocal hook that unfolds and develops fluidly. The alternative edit utilises darker synths and drums, whilst still
retaining the positivity that make this track perfect for the coming summer months. This record is the result of Eric Volta making the demo at an after-party at his studio. He then showed this to Timo Mass who in turn showed it to Basti Grub who loved the track so much, they were inspired to develop it.
“What started as a night out in Berlin visiting Club Der Visionaire, Chalet and ending in Watergate continued into my studio on Reichenbergerstrasse at about 9am. One of those fun afters which result in me grabbing whoever is near
me, a little drunk and a little high and just wanting to play instruments, synths - and JAM. As the lyric goes - We were riding high, writing through the night”

Eric Volta
“A few days later I heard that demo and immediately ask Eric to finish it as it’s so unique and, as it sometimes goes, he didn’t finish it. I asked him many times, roughly over a period of 2 and a half years until i sat with Basti in the studio,
played it to him and we immediately made a new version, Eric loved it. And here’s the result! We are all super proud ofthis.”
Timo Mass
Two time Grammy nominated Timo Maas has an extensive musical background, spanning over thirty years. He’s worked with some of the world’s biggest stars including Madonna, Depeche Mode and Fatboy Slim. Basti Grub heads up his own label, Höhenregler, and is known for his exotic, African-influenced productions. He’s released on some premium labels including Cocoon, Get Physical, Desolate and Cr2. Born in London but very well traveled, Eric Volta
shot into the spotlight with Love Your Illusion and since releases on Dirtybird, Visionquest, Four:Twenty Re