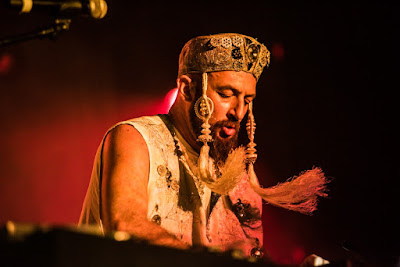 The band led by Lazarus, is comprised of Ben Chetwood on drums, Rob Gentry on keyboards, and new vocalist J Appiah. On Five Moons they are also joined by the Australian punk sensation Chela for a dubbed out, soulful excursion into the darker recesses of the dancefloor.


The Ancient Moons first debuted in 2014 with Lover’s Eyes, and followed that with the acclaimed album ‘Message From The Other Side’, dubbed a “a journey into techno’s dreamiest recesses” by The Fader and a “psychedelic masterpiece’ by Vice. Since then The Ancient Moons have travelled the world with their highly immersive live show, supported Roisin Murphy on tour and played at Glastonbury festival and Melt! amongst others.


Last year the band resurfaced, after locking themselves away to record in the Italian countryside, with I Found You, which nabbed a BBC Essential New Tune and stunning remixes from Black Coffee and Patrice Baumel. Today Five Moons offers another glimpse into this summer’s forthcoming album..
Remixes of ‘Five Moons’ from Jamie Jones and Luciano are to follow.