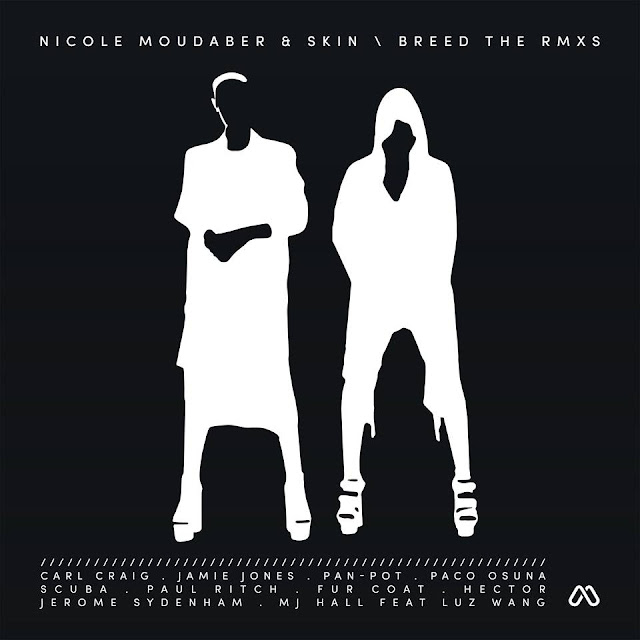 After the release of their collaborative ‘BREED’ EP at the end of last summer, Nicole Moudaber and Skin have unveiled the highly anticipated remix package featuring a long list of respected producers.  by M are just some of the names which have turned their hand to the project. Originally born out of Nicole and Skin ofSkunk Anansie’s desire to fuse their rock and techno backgrounds, this is a true for a collaboration project with a difference.

First, techno legend and remix master Carl Craig provides the only remix of “Someone Like You” featured in the EP. A powerful kick drum alongside the original chords take center stage, whilst Skin’s vocals come to the forefront in a series of tension-filled breakdowns. The EP includes two remixes of “Don’t Talk To Me I’m Dancin’.” Jamie Jones’ take involves a thudding, heavy bassline, including the Zebra Katzvocals sampled over the top, whilst Jerome Sydenham takes the track into faster, heavier territory.

Paco Osuna’s jacking, percussion-filled remix of “You Like This” is currently one of Nicole’s favorite tracks to play out - featuring a surprise buzz-saw synth drop mid way through, it’s easy to visualize the effect this would have on a dancefloor. In his remix of the same track, Berliner Hector keeps the strolling rhythm of the original, adding sub bass and synth touches before bringing the vocals in more than halfway through. MJ Hall, Nicki Minaj’s producer - uses the original as a hip-hop sample, with rapper Luz Wang featured on the track.

Pan-Pot takes on “These Walls Are Made Of Water”, adding the duo’s characteristically stomping touch as well as dramatic new synth melodies. This remix is another Nicole favorite, often featured in her sets and her In the MOOD radio shows. French emotive techno specialist Paul Ritch turns in an atmospheric, driving remix for this track as well.

Lastly we see remixes for the most conventionally “techno” track of the original EP. “Organic Love” is treated to a melodic yet industrial remix by Scuba, whilst Fur Coat remixes the track into a more dark and dramatic affair.

‘BREED The RMXS’ EP is the latest incarnation of Nicole and Skin’s collaboration since the original project’s release in September last year. The pair have since been sharing the stage with each other at high-profile slots such as Space Ibiza and Coachella. Furthermore, the original EP was submitted and accepted into the Grammys for consideration - the remixes ensure that there now is a version of each track to fit into any set.


Get it at Beatport